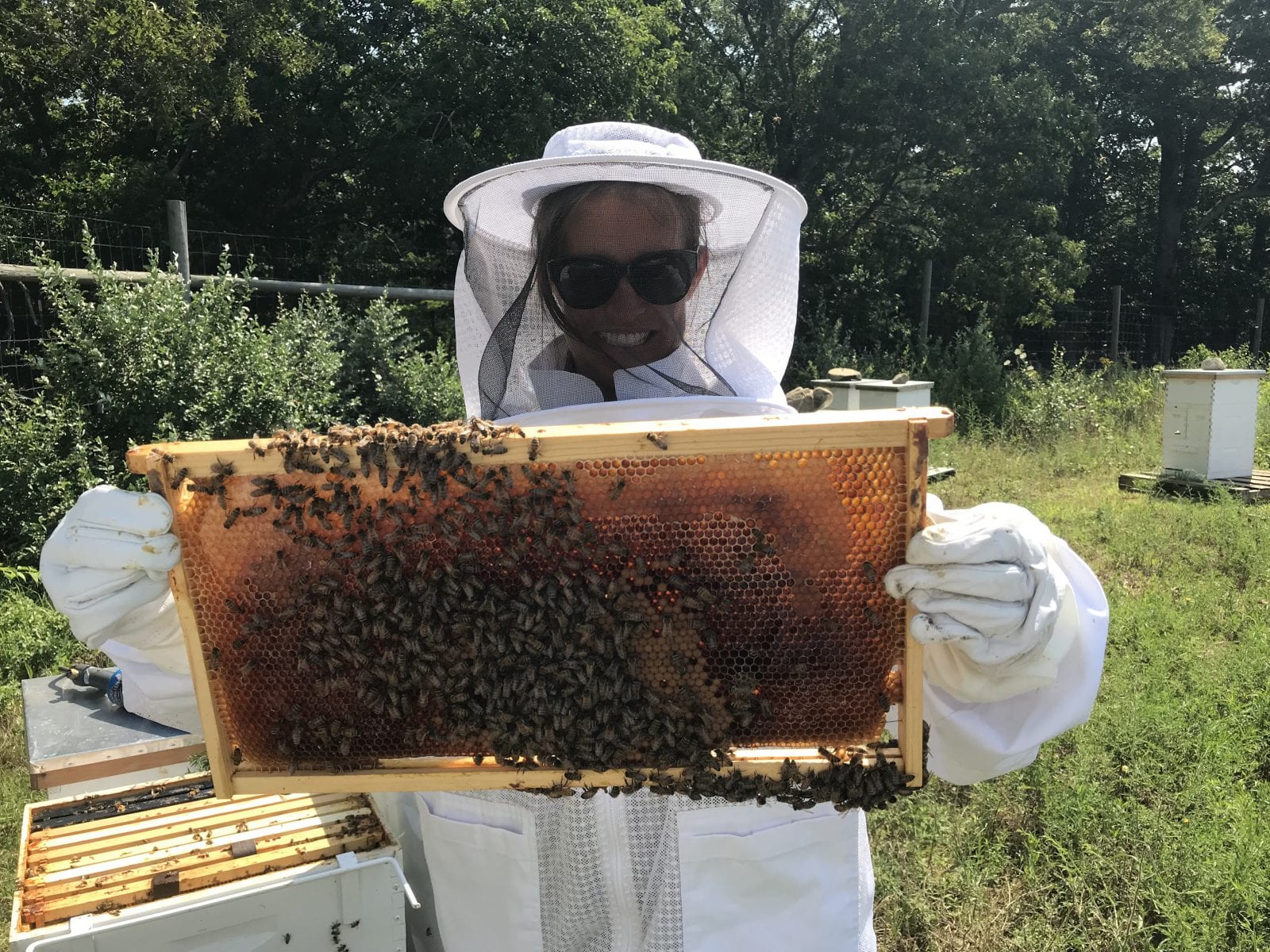 “The keeping of bees is like the direction of sunbeams.”
― Henry David Thoreau

Are you curious about beekeeping? I love bees, but beekeeping was not on my personal bucket list. However, I am always up for a new Martha’s Vineyard experience.

Brent Brown has been working with bees for about 5 years. For him, it is a way to relax (it makes me nervous). It’s his version of yoga.

His farm, Ginny Bee Honey Farms is named after his grandma Ginny, who made the most delicious honey cookies. It’s a way to honor her and it’s also a seemingly perfect name. Also, the logo, designed by his wife Lisa, is on point.

Brent is lucky enough to be friends with the owners of Norton Farm on Edgartown – Vineyard Have Road in Oak Bluffs. Make sure you stop in before or after Ginny Bee. There is a great selection of local produce, flowers, and other provisions.

I did a Saturday morning tour. Brent is really into bees and what they do. He has so much fun talking about his farm, you can’t help but get excited. He has a wealth of knowledge on the subject, and before the hive visit we learned a little history and a bunch of bee facts.

For example, did you know that, the male honey bees are called drones, they have no stingers and do no work.. All they do is fly around looking to mate with a queen bee. Yes, a number of jokes came to mind for me as well.

It was time to suit up. Brent has really awesome beekeeper jackets for you to wear. They’re light and you feel super protected. If you’re a nervous Nelly around bees like I am, I highly recommend wearing long pants and close-toed shoes just to be safe.

We walked over to Norton Farm’s flower field where Brent’s bees were hard at work. It was fascinating to be around so many honey bees collecting pollen, and they were busy. Talk about a symbiotic relationship – the bees pollinate the farm’s flowers and veggies, and the bees have a pretty awesome home.

Then it was off to the hive where there were lots of bees. I have to admit that all those bees made me a little skittish. The sound of them buzzing all around my head — yikes! But I was committed to the experience, and everyone else was so excited.

Brent began taking out frames from the hive. We were able to really see what the bees were up to. They were busy – there was honey production and lots of baby bees incubating. I understand now why Brent finds the bees relaxing. Watching them was mesmerizing.

We then took turns holding frames from the hive. Then we really got up close and personal with them! I even held one. It was very cool, and I felt pretty brave.

We headed back to the farm, and it was time to learn about the honey making process and taste some local honey. Brent’s bees produce really delicious, sweet honey. We also learned about the different color honeys which the season and surrounding plants heavily influence.

When the tour was over, it was time to buy some honey! Ginny Bee Honey is available upon request at Norton Farm. Brent doesn’t produce a ton, but if you happen to be there, definitely ask.

You can experience beekeeping for yourself – from Memorial Day to Columbus Day, 9:00 a.m. on Saturday and 4:00 p.m. on Wednesday. E-mail Brent to schedule your Ginny Bee Honey Farm adventure today ginnybeehoneyfarms@gmail.com.