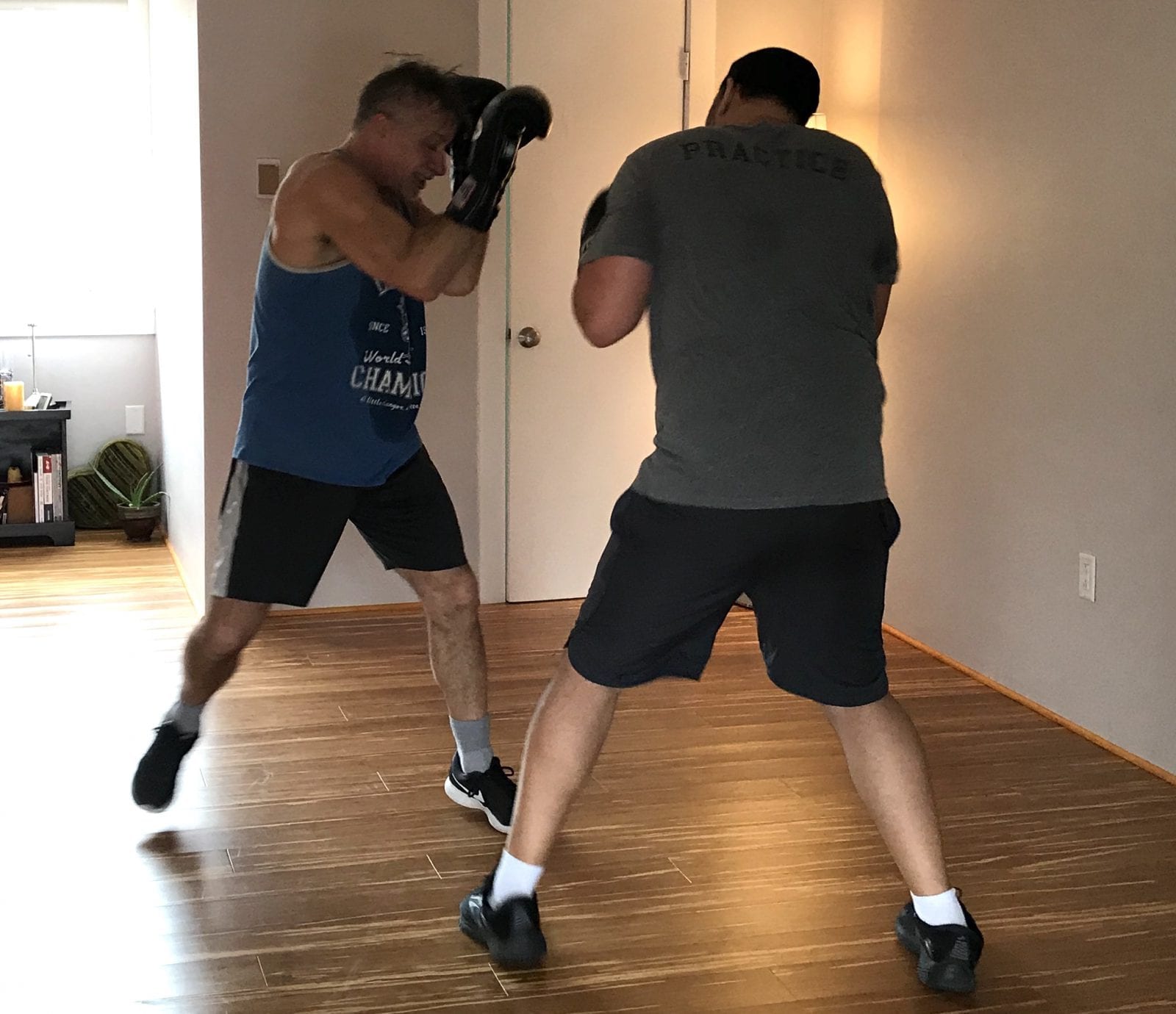 UPDATE: Strong Martha has a new location on State Road in West Tisbury in addition to the classes at Yoga on the Vine!

Boxing On Martha’s Vineyard With Strong Martha — I have talked with countless people about their interest in boxing. There is something about it. The moves, the energy, the graceful dance and of course the incredible workout.

I have been wanting to take a boxing class for a number of years. When my friend found the classes at Yoga on the Vine at the Triangle in Edgartown, I knew it was time.

Yoga on the Vine is a sweet little space nestled in at the Triangle near the Mail Room store. It hosts all sorts of great yoga classes, like Yin Yoga, heated Vinyasa and boxing.

You might think it’s strange to offer yoga and boxing on Martha’s Vineyard, but once you take a class with Strong Martha instructor, Charlie Giordano, it makes perfect sense.

Charlie’s classes are smaller, maxing out at eight participants. When I went to his Sunday morning session at 10:30 a.m., there were four of us in total. Myself and Holly, both first-timers, and two who have been working with Charlie since November, Jeremy and Rob.

I am not going to kid you — I was a little intimidated. Charlie immediately began wrapping my hands, in preparation for my boxing gloves – we were diving in. I was going to be boxing on Martha’s Vineyard!

When I asked how long he has been boxing, he responded 350 million years, it has been a long time. Charlie has a quick smile, a soft voice and is a lean, not so mean boxing machine.

For Charlie, boxing is about life in miniature. There are three minute rounds. Rounds that are different, that surprise and shock you, force you to think and constantly evolve.

It’s not fighting, it’s a game of skill and challenge. It’s a choreographed dance that is constantly challenging you to adapt, to challenge yourself, your opponent.

There is repetition, but always a chance to improve, just like in life. And just like life requires discipline, so does boxing. For Charlie, boxing has helped him become much better at all things in life.

For a first timer, I did not know what to expect. I thought a little moving here and there, maybe a jab or two.

I was underestimating what was to come. Jeremy and Rob were boxing – demonstrating moves, carefully, skillfully challenging each other. Holly and I went one-on-one with Charlie. Each of us learning some basic techniques.

Having Fun Boxing On Martha’s Vineyard

Nothing was as easy as it seemed. The positioning of your arms, your body, your thoughts – it was all new, and yet empowering. It was amazing how working with Charlie helped you hone in on the basics.

The jab, the one two, the jab, jab, duck – it is like a dance. A series of motions where you use muscles that have been dormant for decades.

Feeling your own force when coming into contact with his gloves – it was incredible. Sparring with Charlie around the room, was so empowering. The class was full of instruction and practice but was somehow so liberating.

I think in boxing, you can find a gentle strength that you may not have been aware of. You have to be in each movement completely or risk defeat. By defeat, I don’t mean punched out, but you loose the game to your opponent who out smarted, out maneuvered you.

With this sport, you challenge yourself in new ways. Towards the end, I was exhausted, my hands were sore, but I dug down deep to finish strong. I had to, we all did. There was a sense of community about the whole experience. Learned and novice and the trainer, all working together. Leaving the session, feeling stronger, wanting more.

It’s a sport of whit and movement and control. A sport that is for the dedicated. Is it for you? Why not visit one of Charlie’s classes. Though I am over-scheduled at the moment, I am going to keep his classes in mind.