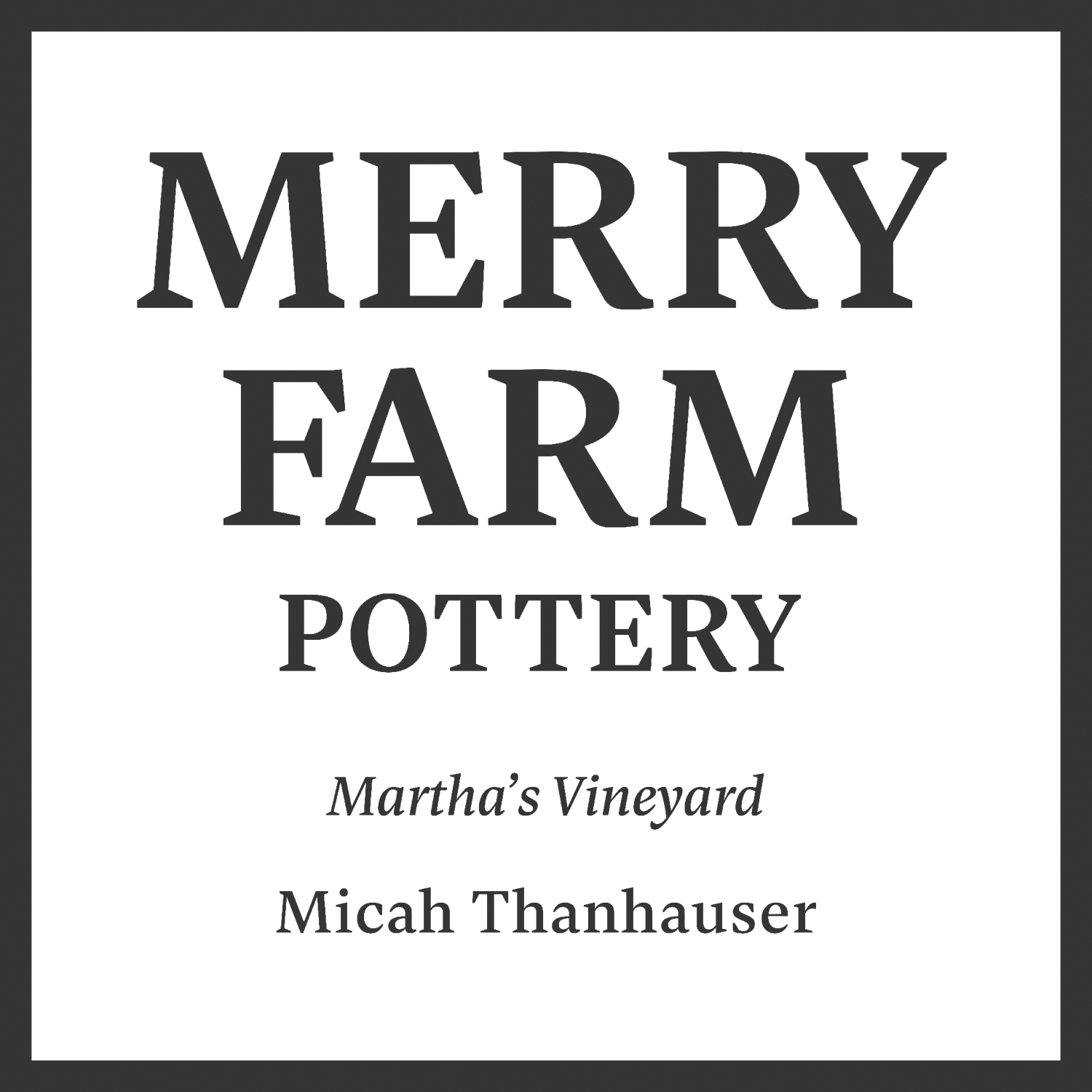 After the season ended, he hosted an open house at his studio and home, Merry Farm Pottery in West Tisbury. It was at this open house that I first saw his work and became a fan.

I bought a small bowl that has been used for many things by other customers, to hold butter or sauces and such. However, to me it looked like a wine bottle holder. I grabbed a bottle he had open for guest, brought it over and it fit perfectly! Loved it! I bought one ($22.00) and have used it for every bottle of wine since then. I liked it so much, I had to go back for more and decided to learn more about Merry Farm Pottery.

Merry Farm Pottery is rooted in materials and place. The pieces have an organic feel to them. From mugs, to plates, to vases, interesting bowls and more, Micah’s pottery looks simple, yet not. There is a fluidity to many of the pieces, a liveliness that is meant to compliment what you use it for.

Some folks might have pieces of Micah’s work. He grew up on the Island and while in high school, he took a class that included learning how to make pottery. He immediately was drawn to the process. It is like therapy for Micah. He even held mini pop-up pottery sales at his mom’s house when he was in high shcool.

He went on to pursue this art that captured his soul. “After studying pottery in Rhode Island, Maine, North Carolina, and Japan, and finally apprenticing for three years for potter Akira Satake, he returned home to build his kiln and workshop. He uses minimally processed natural materials to produce work that is functional, lively, and engaging”.

While in his apprenticeship at Akira Satake, he began his own line of pottery. He worked on his passion, and his girlfriend, now wife, Emily, pursued her passion in acupuncture. Both Emily and Micah had strong Island ties, and knew that they would come back to Martha’s Vineyard.

They bought a house that had a workspace that used to be used for boat building, and began their lives here. They now have a baby and both are working in their desired fields.

Each piece of Merry Farm Pottery has it’s own “life to it”. Each piece works in harmony with what its used for, never competing but rather complimenting it.

Currently, Micah is working on custom dinnerware sets for people. His studio table is covered with dishes waiting for the next phase. He is also creating inventory to be sold on the Island during the Summer. However, if you’d like to visit Merry Farm Pottery, Micah welcomes guest. He is happy to help you select pieces of Merry Farm Pottery.

On a side note, I was surprised to see how small the pottery wheel to create his beautiful pieces is. Not that I am at all familiar with pottery wheels, but his pieces evoke thought and are so beautiful, I imagined something grand. But, it’s true, you can’t judge a book by its cover.

Even watching Micah add a handle to one of his mugs (top sellers) was a treat. Also, be on the lookout for special pieces, wall art and limited editions made from Island salvaged clay. Merry Farm Pottery pieces range from $20.00 to $400.00.

A piece of Merry Farm Pottery is a wonderful addition to your collection of handmade goods. I know that I am a big fan. There is something special about using something made by someone you know, someone who is a neighbor, supporting their dream. To learn more about Merry Farm Pottery or schedule a visit, click here.