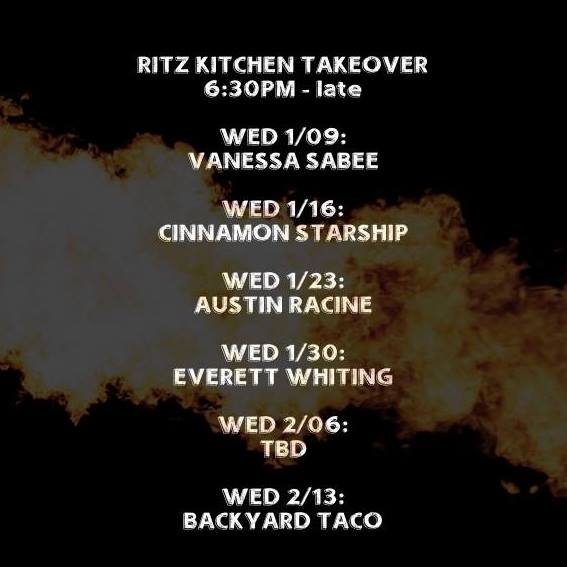 Ritz Kitchen Takeover Chef Series On Martha’s Vineyard – When Kelly, the manager of The Ritz in Oak Bluffs told me about the Ritz Kitchen Chef Takeover series they were doing, I was over the moon.

Each Wednesday, end date to be determined, an Island chef/foodie does just that — takes over the kitchen at The Ritz.

This idea came about when Island musician, Johnny Hoy, asked Kelly one night after a set if his friend and tenant, Olivia, could do a pop-up dinner one night. Thinking it sounded like fun, more chefs were contacted, and Wednesday night is now one of the most fun nights of the Winter season!

I went to the second of the series, which just so happened to be Olivia Pattison’s night. Many of you may be familiar with Olivia from Cinnamon Starship, where she makes incredible . Or perhaps you’ve have seen in her serving up delicious food at places like the Dock Street Diner and the Larder.

On Ritz Kitchen Chef Takeover nights, the chef creates a menu catered to his or her talents and palate. You can bet that there was Cinnamon Starship bread featured in a number of the dishes.

Olivia offered apps, main dishes, sides, desserts and even drinks. There was a nice amount of other local components like Mermaid Farm, the Good Farm, and Morning Glory Farm.

For a drink, I had Olivia’s Starship Sour which was whiskey with her own sour mix – so good! Things from scratch always taste so much better!

For an appetizer, I opted for the Marinated Mermaid Farm Feta with Morning Glory Farm Squash and Cinnamon Starship Toast. It was scrumptious. Fresh, light, flavorful, it was spot on, and of course, the bread was the “icing on the cake”.

When I asked around in the crowd of familiar faces, what to have for dinner, everyone said either the brisket or the grilled cheese. Since the brisket was sold out at this point, grilled cheese was next on the menu for me.

Grilled cheese is always such a decadent dish to me. The adult versions are so good. Ooey gooey cheese, fun toppings, the whole experience, though usually super unhealthy, tend to be extremely satisfying.

Olivia’s did not disappoint. I opted for the one with Good Farm ham. With her homemade bread, the fresh ham, and two types of cheeses, this was out this world yummy. I love when something so basic can be so darn good.

After all the bread, it seemed impossible to consider dessert, but next to me there happened to be someone ordering the Chocolate Tart with homemade whipped cream. Apparently it was really good, but once again I was so full. Perhaps for the next pop-up I will be up for dessert.

Things I loved about this night at The Ritz Chef Takeover — all the homemade things on the menu, seeing someone new in the kitchen, and only for one night, the music, Johnny Hoy and the Bluefish were jamming, and the crowd! The place was packed, and with a very diverse crowd.

Olivia showed her food talents in the kitchen and though she was beyond busy, she seemed to have fun. It was a really fun, delicious experience! Cheers to a great job Olivia!

These nights are sprinkled with a little Island magic. Eating under a disco ball makes for an entertaining experience, especially when it’s so grey outside. I bet each one is going to be outstanding, and I know I will be back for at least one more.

Thanks Johnny Hoy for the great idea, and thanks Kelly and Ritz staff for running with this idea. These nights are going to be some of the most memorable on the Island this Winter.