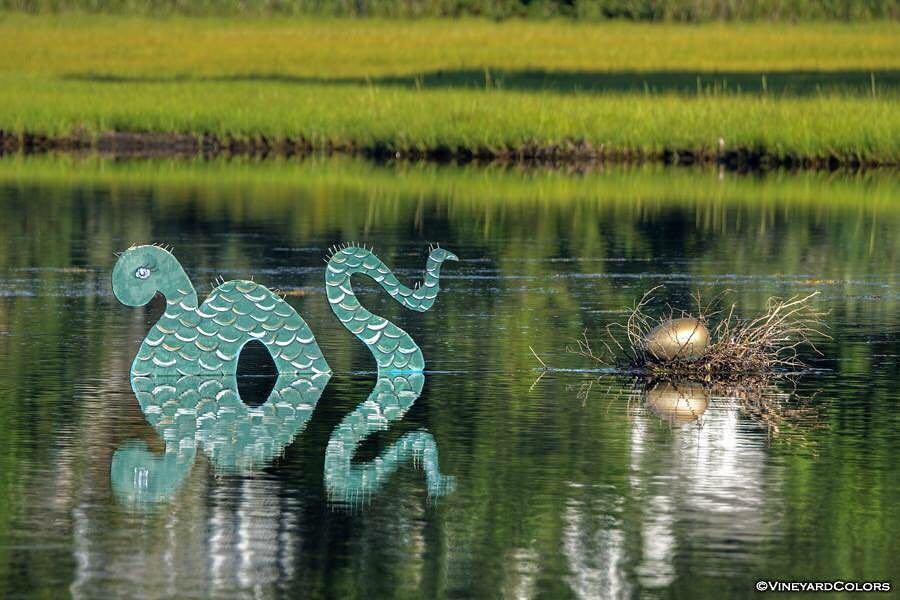 For years, I have admired, and been extremely curious about the sea serpent that calls Farm Pond in Oak Bluffs its home for the Summer months. It became even more of an icon once I had little Island babies.

Then, last year, I discovered the book – Vanessa, The Sea Serpent of Martha’s Vineyard at Bunch of Grapes. With this book, my children and I discovered the story behind Vanessa, including how Farm Pond became her home.

Really, you need to get the book, but here’s an abridged version. Vanessa was a live sea serpent who loves to be around people on Martha’s Vineyard. However, people were scared of her.

So, a woman with special Island magic, turns Vanessa into a solid form for the season. She then becomes her true self again once Labor Day comes. She goes into the open ocean and has epic sea serpent adventures.

The Author of Vanessa, The Sea Serpent of Martha’s Vineyard is Vanessa’s creator’s niece, Amelie Loyot. Amelie wrote the book three years ago. She has been Vanessa’s head caretaker for years, and had always wanted to tell Vanessa’s story.

Amelie and her family live on Vanessa Way, which has a stunning view of Farm Pond. From their porch, Amelie could hear the things people would say about the sea serpent — guessing at the name, the origin, etc. Finally, Amelie was at a place in her life where she could write the tale. Never could she imagine the impact of this story.

For over a year, she worked on Vanessa’s story, weaving the magic from her family’s creation into a story that captivates readers and answers a lot of questions. Her aunt Mindy did actually have a horse, and a dog. However, Amelie tells me that Mindy’s mother also had Island magic (you have to read the story)!

Now people stop Amelie, hug her, tell her what Vanessa means to them. All these stories and love for Vanessa have left her in awe. The joy, magic, and sense of wonder that Vanessa’s story has enabled so many to experience. It truly has been a gift.

Amelie has always thought of the island as her home. She moved here as a child because of her father’s work. The only constant place was Martha’s Vineyard, a place she has always felt a part of. Sharing the story and continuing her family’s legacy has been amazing. Her daughter, Alexandra, is a caretaker in training.

Now, you might have noticed that something magical has happened this Summer. Vanessa laid an egg under the light of the fireworks on Fourth of July. A beautiful golden egg sits nestled in a nest, trailing behind its mom.

Now Vanessa has had other children over the years, and they’ve all grown up and are on their own adventures, but this one is different. During the third week of August, the gestation period will come to an end and the egg will hatch.

This baby will be a rare baby and treasured little one. Following the hatching, there will come quite a story, which will hit bookstores in 2017.

I am not sure about you, but when I saw the egg, I was so excited. When I brought Charlotte and Anderson, they could not believe it. The wonder, the magic, it was clearly visible on their face. It was all they could talk about for days. Now, we not only say hi to Vanessa as we drive by, but now to the little one. Their joy translates to joy for me. So simple, so sweet — another little bit of Island magic.

How Vanessa Came To Farm Pond

Vanessa was first introduced in 1982 by Amelie’s aunt, Mindy Kendall. She was originally put in the pond as a way to have people become aware of Farm Pond and the pollution problem. She was able to achieve that and so much more. Little did they know that Vanessa would become a part of the Island’s history.

The Martha’s Vineyard Sea Serpent is a girl. You should also know that she is sister of Nessy, the very shy Loch Ness Monster. She is also distantly related to Champ, and many others she has discovered during her off-season adventures.

Vanessa has become something that is a part of the magic of the Island, something that generations have shared. She enables people of all ages to let their imagination soar. Each year, Amelie and some of the serpent keepers help get her into water in the depths of night. Vanessa has to come unnoticed and leave in the same way.

You too can celebrate the magic. Vanessa – The Sea Serpent of Martha’s Vineyard can be found at Rainy Day, Bunch of Grapes, the Secret Garden, and Edgartown Books. You can also get a Vanessa huggable, which really is super good for hugging. This magical story is truly a gift to the Island and the shores beyond.

I can’t wait for the egg to hatch!! Thank you Amelie, to you and your family for giving us this amazing way to use our imagination, and for a landmark that brings so much joy to people.