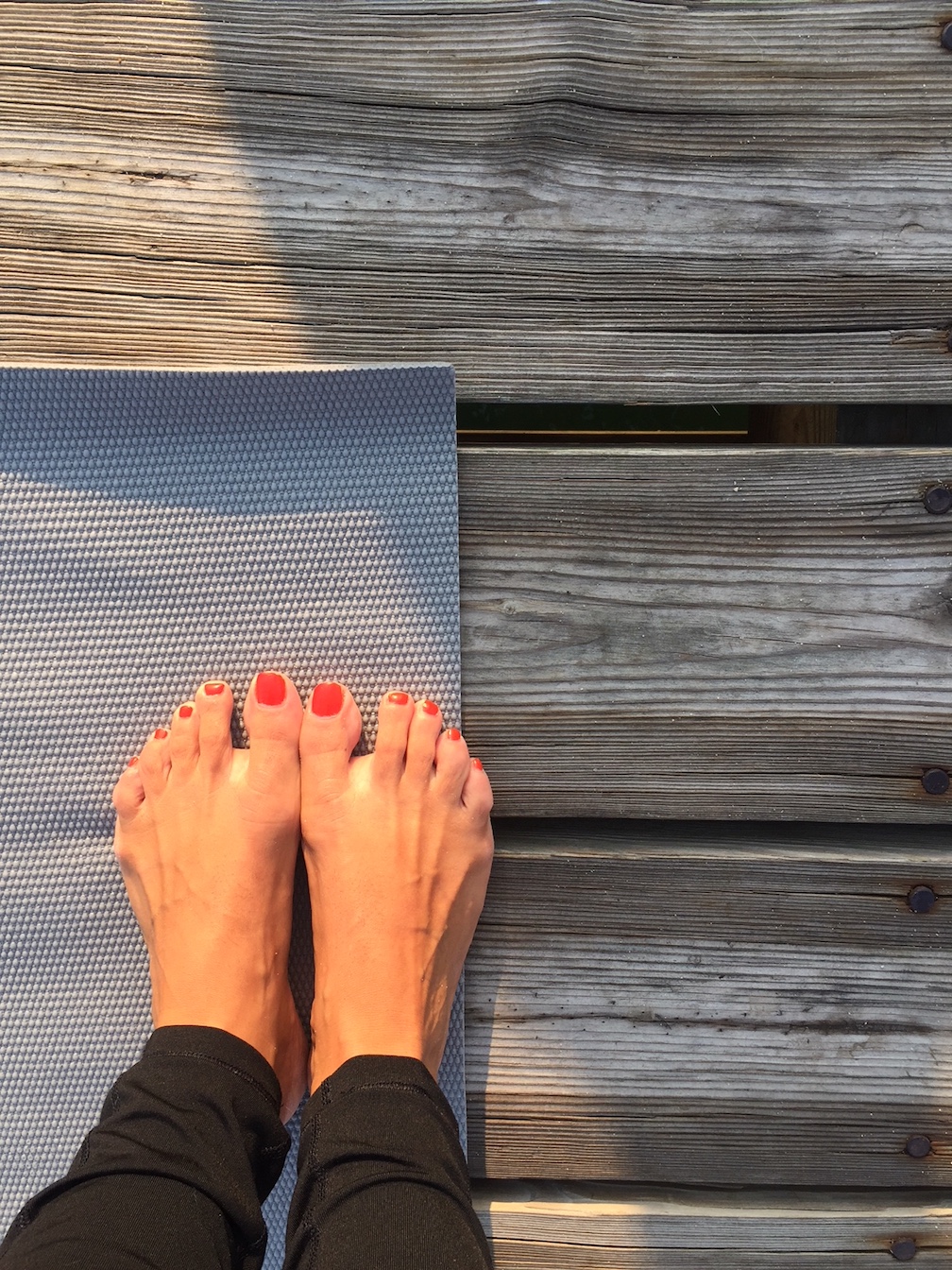 Yoga certainly is not a new phenomenon on the Island or elsewhere, but you can experience it on Martha’s Vineyard in a very special way – Dock Yoga with Sherry Sidoti. For a few Summers, she would go to the dock at Owen Park at sunrise to practice yoga, which as you can imagine was a great way to start her day. People would ask her about it and some would join her. She got to know the boaters and the fisherman, the regulars there, and they were receptive to her practice.

Sherry invited a group from her yoga sessions, who were 6:00 a.m. regulars, then invited others and it continued to grow. The class, Outdoor Vinyasa, Dock Yoga at Owen Park, was just put on her schedule officially last year. It was originally a word of mouth thing, mostly Islanders, but it has caught on and for good reason.

I have done beach yoga. I have done yoga outdoors, I have done hot yoga, but I had yet to experience it on the water. It is truly a magical practice.

I managed to wake up in time on a Tuesday, classes are Tuesday and Thursday, and are $20 if you drop in like I did. With my mat in hand, I walked out onto the dock. The sun had yet to fully rise and there was residual fog from the cooler evening. 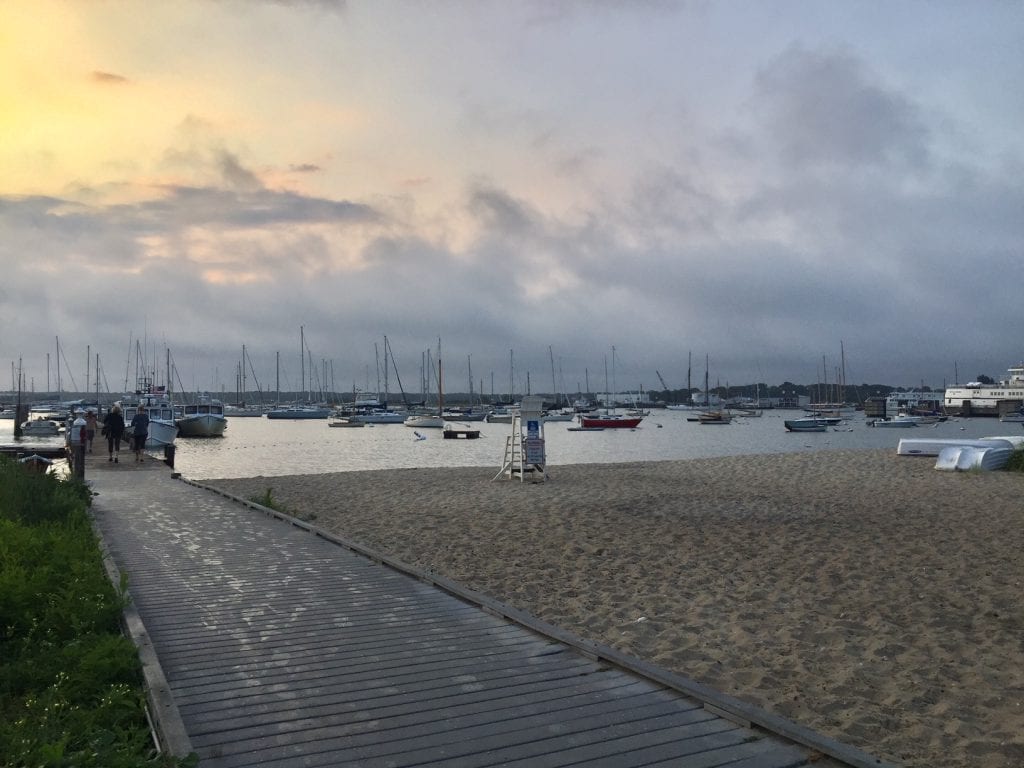 As I settled in, I took a moment to focus on my surroundings. The birds were chirping, the water was lapping quietly below, the air smelled of the sea. All of your senses had something to experience, creating a different type of mindset for the Vinyasa practice I was about to embark on. 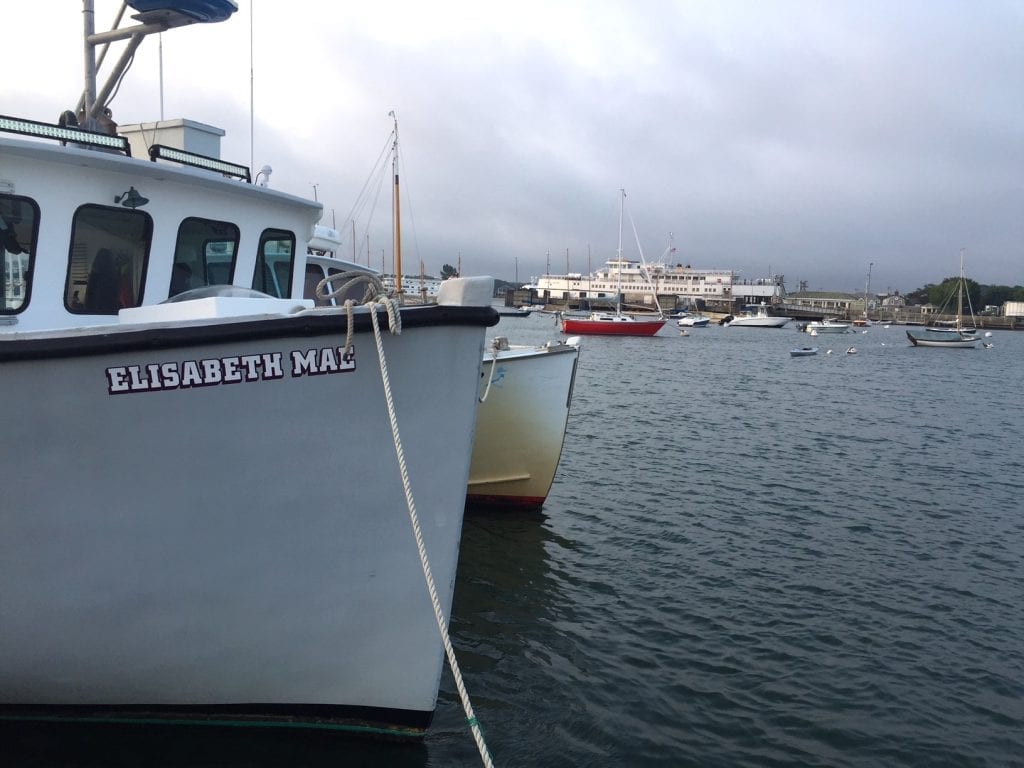 For yoga, a good teacher is key to a good practice. Sherry is one for the best on the Island. She has been practicing for decades, teaches others to become yogis, and even has her own school, FLY Yoga, in Vineyard Haven.

We began our practice, easing into moves to stretch our bodies and open our hearts and minds. Sherry’s voice is gentle yet motivating. I enjoyed how she was clear with direction, and so descriptive with the poses, and helping to get our mind focused in the moment. I even learned a thing or two. For example, if you feel nauseous coming out of a pose, it’s because your body is releasing toxins. I thought it was because I was such a novice. 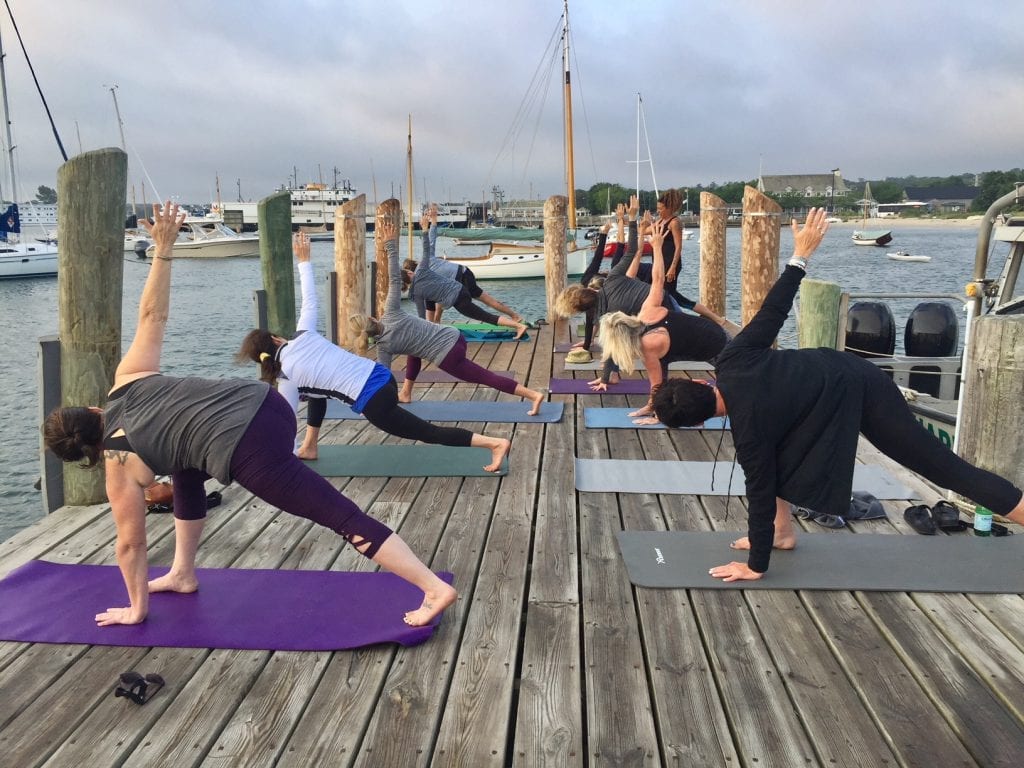 Also within the practice, we were encouraged to enjoy the sun that had risen and broken free from the clouds, to bask in the new day, which had so much potential. With each pose that brought your face close to the dock, you felt close to the water, almost as if you were floating above it, which I kind of was. 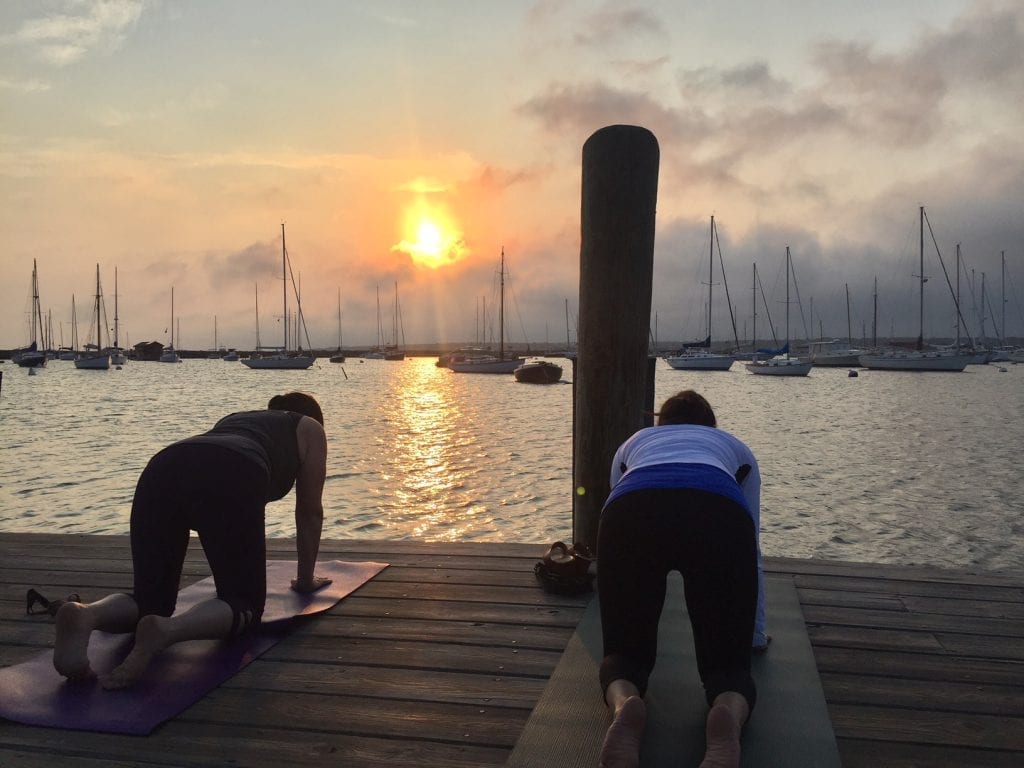 As you reached up, as the practice went on, there was a bluebird sky and the sounds of the water all around us. The sun felt extra supportive and welcoming. One of the best things Sherry said, as we were heading into Shavasana was, “The wind is your blanket.” As I closed my eyes to relax, I felt the wind lightly blowing over me, cooling me rather than enveloping me with warmth, and it was magical. I felt so relaxed and grateful for the experience. 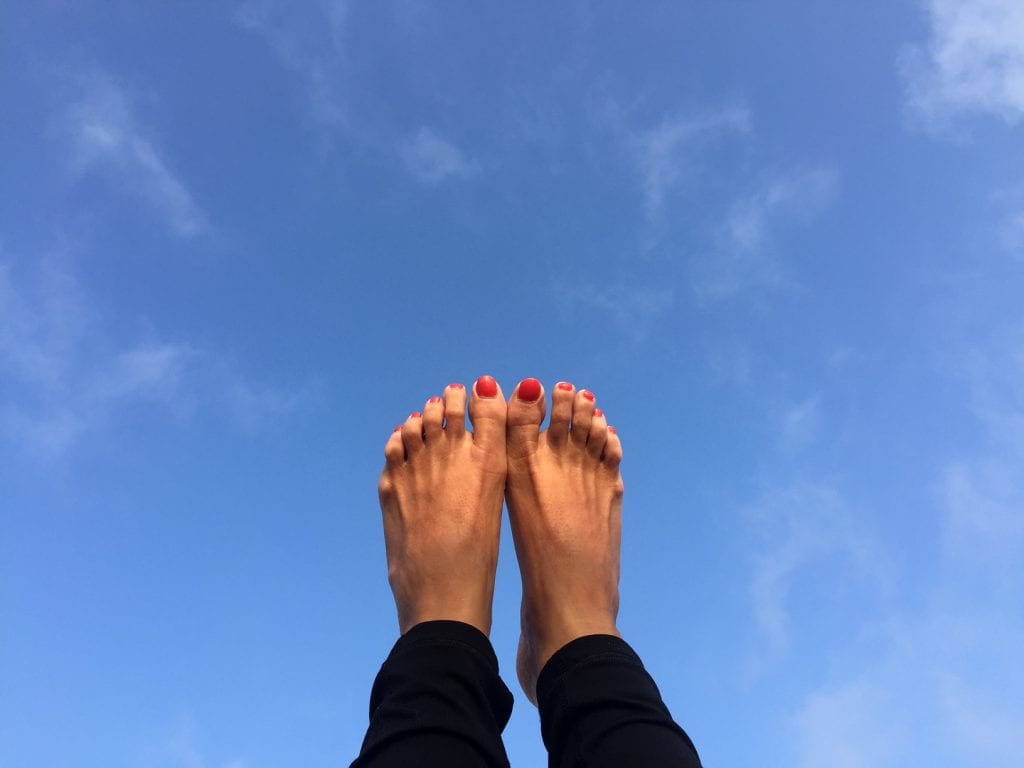 This class was restorative for me. After a crazy couple of full Summer weeks, I needed to feel centered, even if just for an hour. I was grateful for feeling so close to the sea, and the work out I accomplished. I left feeling inspired, really ready for the day in front of me. 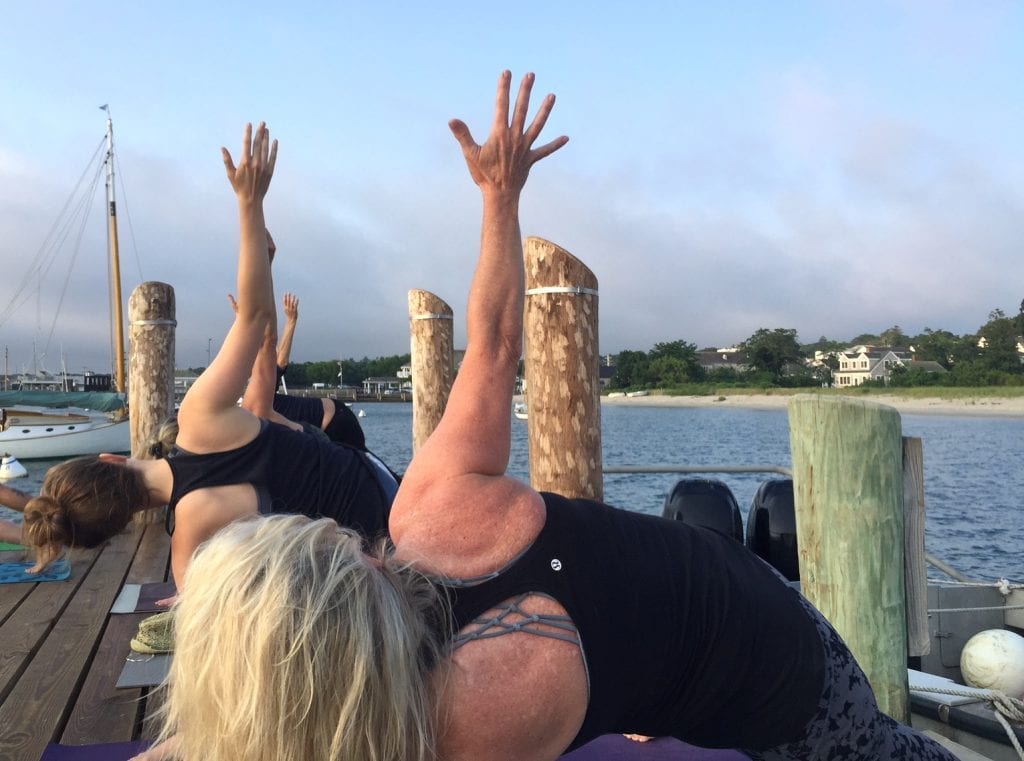 Dock Yoga is a such a Vineyard experience. It’s one of those special gifts that you can give to yourself while here, and any skill level can do it. It is a great yoga practice but one that is truly special. I know I look forward to my next Dock Yoga!

There are limited spaces for the Dock Yoga. You can pre-register on her website, click here Also, please remember to arrive 15 minutes before class is scheduled to begin.

Author’s Note: It’s challenging to take pics when you really want to be in the moment but there was some success here.