The West Tisbury Farmer’s Market is always fun to venture to. As a matter of fact, it is one of our Vineyard Bucket List experiences that everyone should experience at least once. 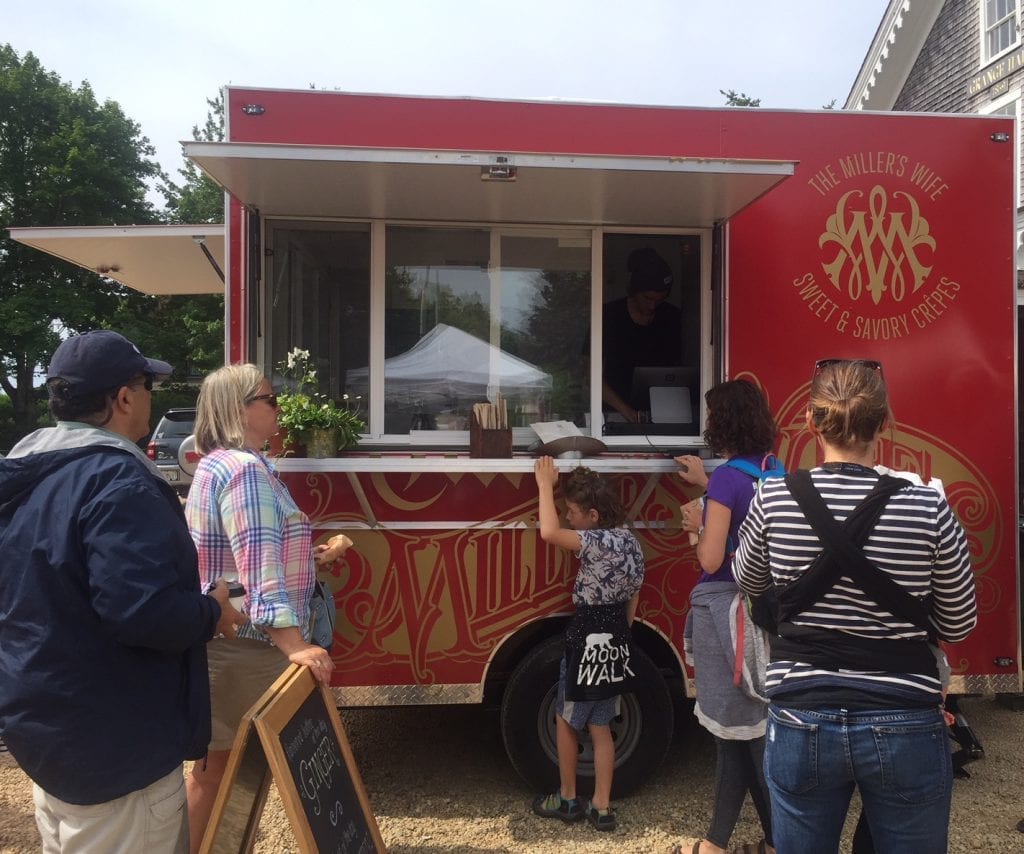 Some people go for specific things, some people go to be inspired by the bounty of the Islands’ farms, some go for breakfast, and to just enjoy the scene. Well, I now go for crepes. Wednesday, June 27th, the The Miller’s Wife Sweet & Savory Crêpes trailer made its debut at the market. 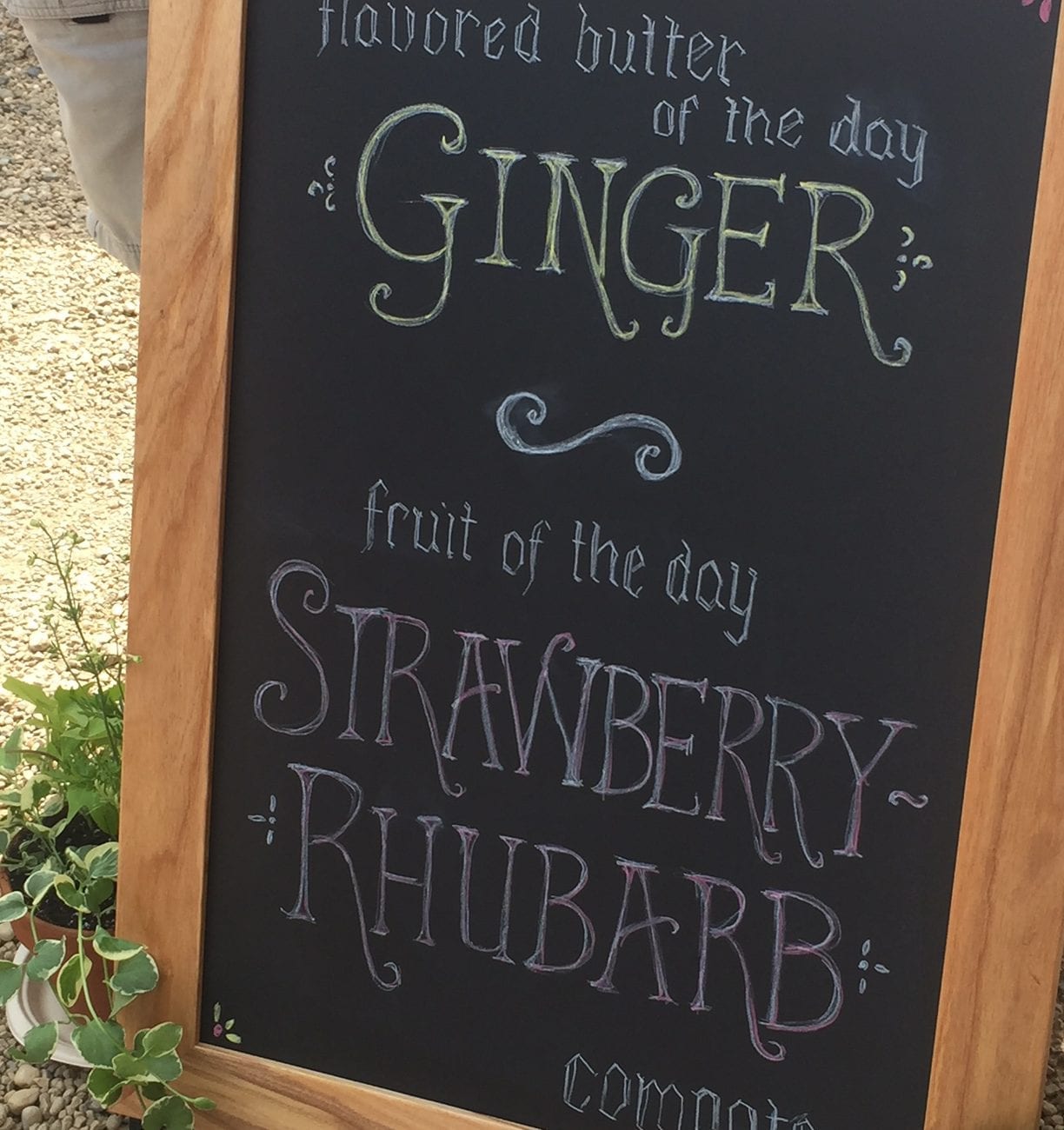 This electric powered trailer is the first of its kind, and definitely piqued the interest of visitors that morning. There was quite the line for The Miller’s Wife, which I was grateful for. You wouldn’t believe the menu this little red gem offers for crêpes. Deciding was really hard!. 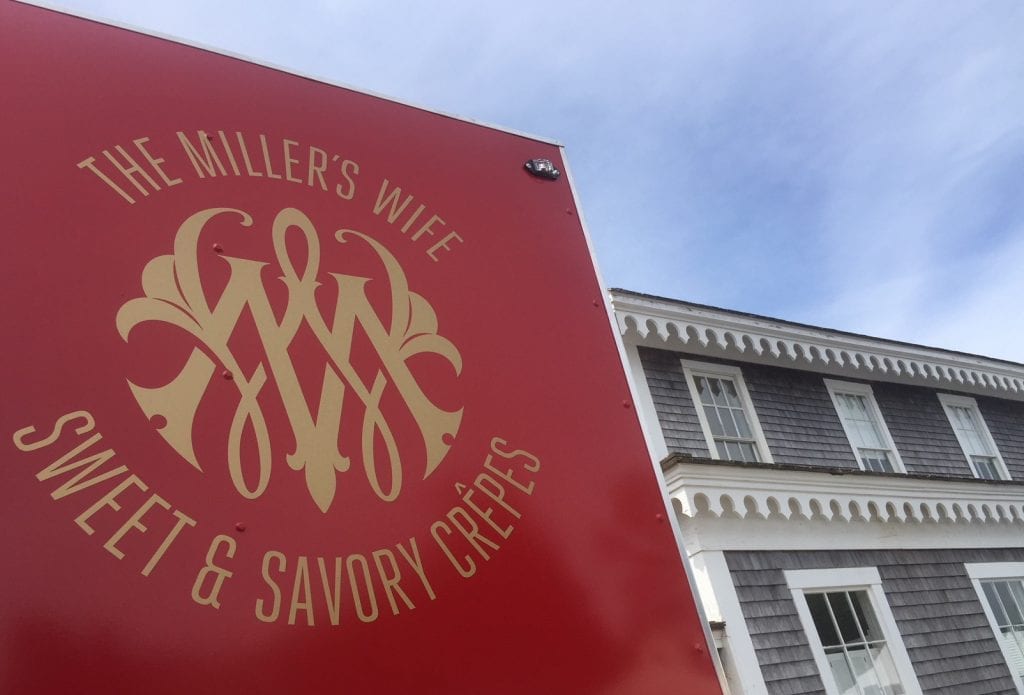 The Miller’s Wife offers sweet and savory crêpes. For savory, you can choose from this Island inspired creation, the Rustic Buckwheat with MV Smokehouse hickory smoked Atlantic Bluefish and herbed creme fraiche. 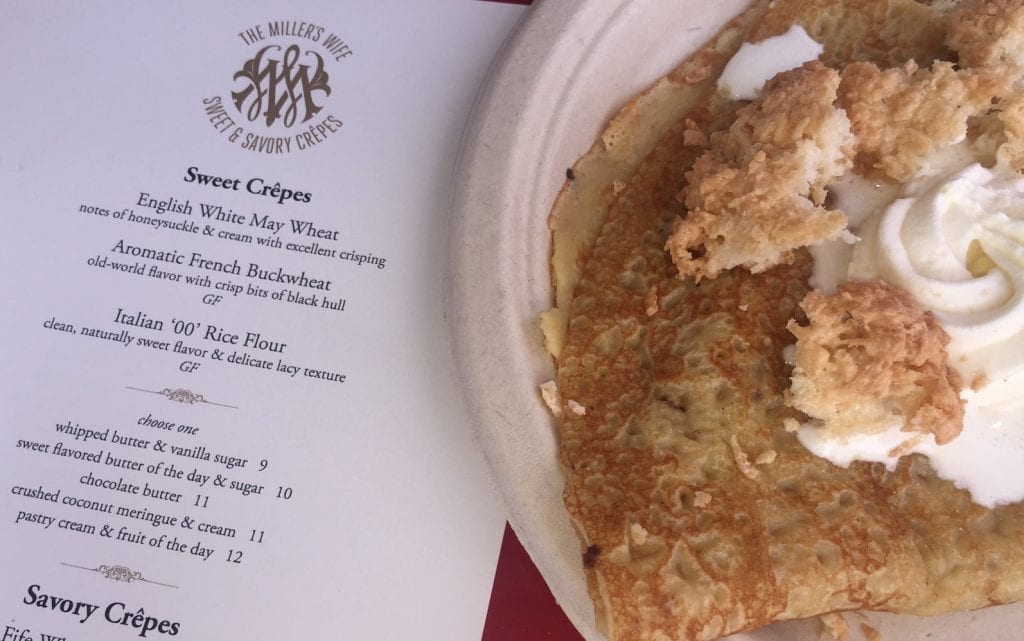 For sweet, there were a lot more options, and I was feeling sweet. Struggling between the Pastry Cream and fruit of the day, which was Strawberry Rhubarb, or the Crushed Coconut meringue and cream, I decided on the coconut with English White May Wheat. I have a weakness for things with coconut. 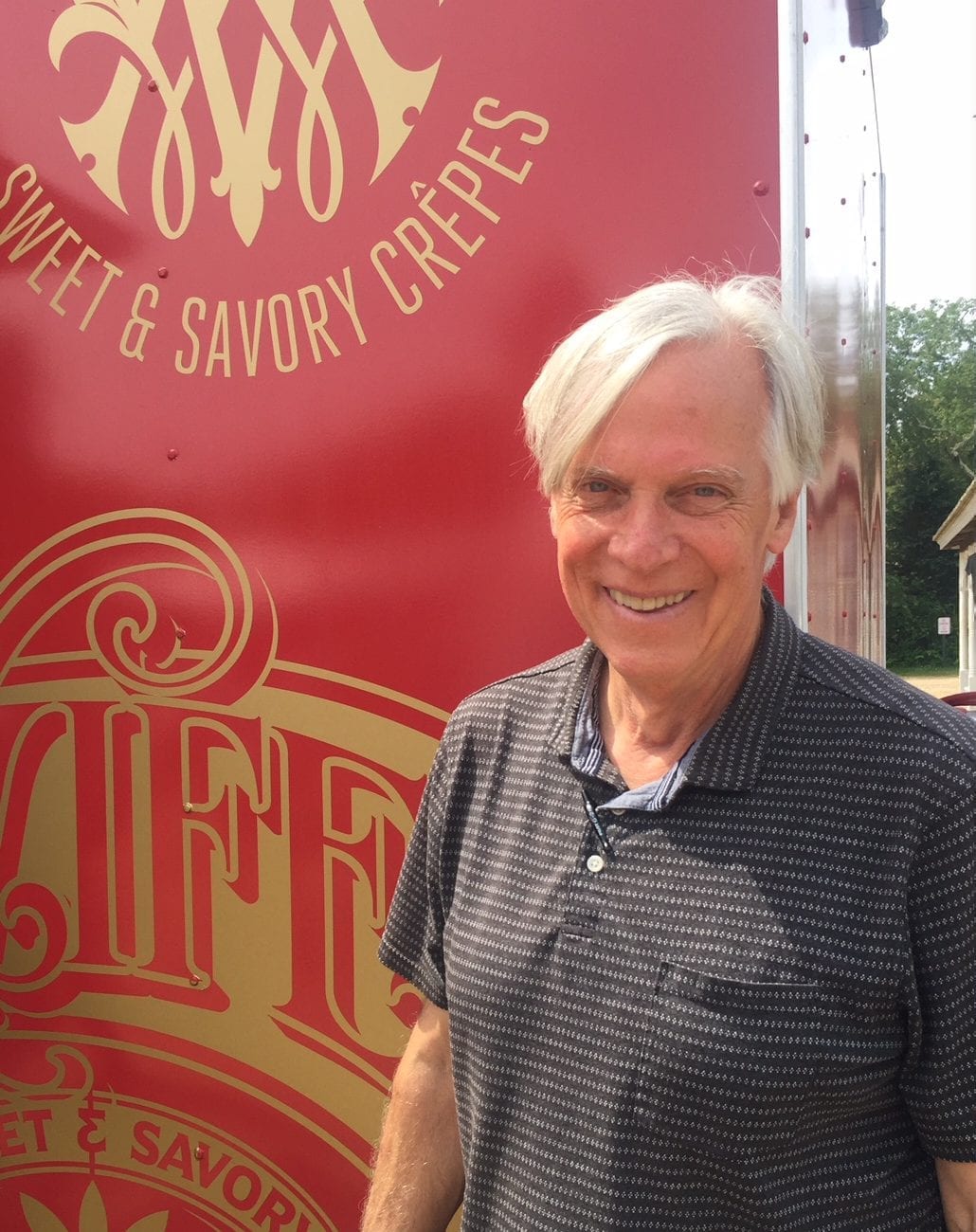 While waiting to order, there was a gentlemen answering questions and talking with those of us who were in line. He seemed knowledgeable, and so we started talking. He turned out to be a pretty important player in this magical little trailer.

He was Glenn Roberts, the owner of Anson Mills, the source for heirloom grains in America. His wife Kay Rentschler is the woman behind The Miller’s Wife. After meeting Glenn, I get the humor of the name, The Miller’s Wife. Kay is the Miller’s wife. I had assumed there was a family name association. Inside the trailer, making the incredible crêpes was Kay along with Henry Jones. Both were extremely busy taking orders and making crêpes. Luckily I was able to learn so much by talking with Glenn. Henry is a well known baker, who recently moved back to the Island from Charleston. Glenn said he has big plans for baking here year round. Kay is a pastry chef, having trained in Berlin and Paris. Knowing that, it’s no surprise that crêpes are her specialty. Glenn said Kay and her friends came up with the concept for the crêpe trailer over Christmas. Kay is here throughout the year at their Chilmark home, while Glenn does a lot of traveling for his job.

Glenn was definitely doing a great job as the the creperie’s husband at the farmer’s market. He was beaming with pride.

What a great partnership! The grains used for the crêpes come from Anson, and Kay is magical with flavors, and creates delightful light, beautiful crêpes. Also, the other ingredients used are locally sourced or grown by Kay and Glenn. All together, you’ve got the perfect recipe. 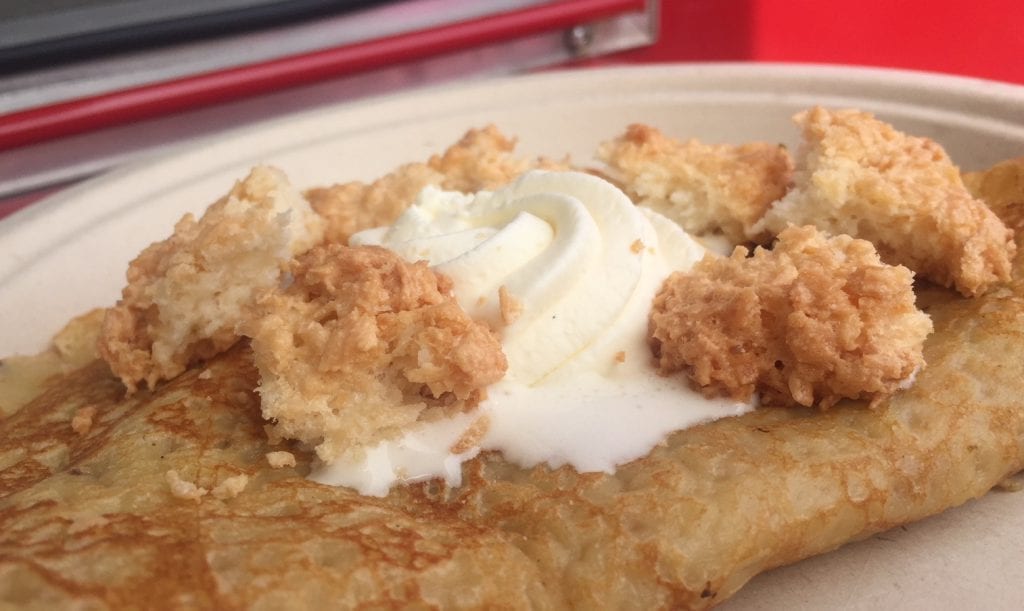 As I mentioned, I opted for the Crushed Coconut Meringue & Cream sweet Crêpe ($11). It was really, really good. So light and flavorful, and the coconut clusters on the crêpe should be packaged as gourmet snacks. It’s incredible what Kay is able to create in that little red trailer. It’s the little red trailer that could — could create incredible crepes! Kay has brought a new level of yumminess to the food scene at the Market.

Having The Miller’s Wife only at the West Tisbury Farmer’s Market is a bit of a game changer. It means that I now need to go on Wednesdays, instead of Saturdays, because one of Kay’s crêpes and a cup of Nitro from Chilmark Coffee is the way I want to start my day as often as possible. The flavors, the ingredients, the presentation (eco friendly cutlery and plates) make The Miller’s Wife Sweet & Savory Crêpes a must to try, a welcomed new Summer foodie tradition.

Author’s Note: some of the greatest bakers on the Island, like Georgia Macon from Behind the Bookstore, and Olivia Pattison from Cinnamon Starship, use Anson Mills heirloom grains. These unprocessed grains are healthier and produce a much better baked good. It was really cool to meet the man behind Anson Mills.

1 thought on “The Little Red Trailer That Could, The Miller’s Wife Sweet & Savory Crepes – New Foodie Addition To The West Tisbury Farmers’ Market On Martha’s Vineyard”